To share your memory on the wall of David Kunzmann, sign in using one of the following options:

To send flowers to the family or plant a tree in memory of David L. Kunzmann, please visit our Heartfelt Sympathies Store.

We encourage you to share your most beloved memories of David here, so that the family and other loved ones can always see it. You can upload cherished photographs, or share your favorite stories, and can even comment on those shared by others.

Posted Jul 11, 2021 at 03:07pm
When i first met David & Carol, i remember how eager and proud he was to show me his train set-up in the basement. Also, he had to play me a few songs on the organ. Thanx to David i have much cleaner air in my house🤗. His generosity was amazing. He & Carol were a joy to be around, & their stories of the adventures they had going to & watching the plays at The Hanger Theater were a stitch. They both so totally enjoyed their lives together, & had such funny stories of growing up together. Condolences to the family🙏
Comment Share
Share via:
BH

Posted Jun 20, 2021 at 10:20am
Dave was a real "spark" at Shepard Niles for many years....he was a great asset to the Sales Department and helped so many of us learning about the products..he had a great sense of humor and his laugh was very recognizable.....we were glad to be friends of Dave and Carol. 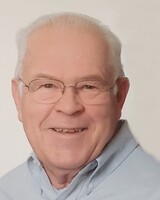